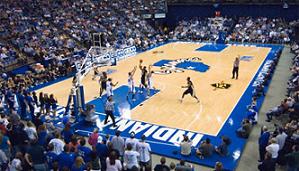 I am a fan of College and NBA basketball and I also play for fun on the side. Two topics I would suggest for your new locker room forum would be “Fantasy Team Picks” and “Scores and Showdowns.”

For the Fantasy Team Picks topic, this would be for those that are in fantasy NBA or basketball leagues where they pick their favorite players for their team. The discussions under this post would also include the hottest rookie players to draft onto their team and things of this sort.

This topic would come in very handy to those people that are in a fantasy league and are unsure about who to draft, and the posts here would be very helpful.

The Scores and Showdowns topic would be for anyone to comment on the best game that they have seen or more recent games that were so good and were very suspenseful.

This would be helpful to basketball fans and would encourage people to look for the highlights of these games on the internet or on SportsCenter so they can check out the game for themselves.