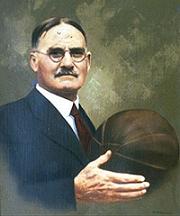 Who invented the game of basketball?

Looking for a biography on Dr. James Naismith? Need more information about the inventor of basketball? Well…you’ve come to the right place!


I’m sure you all know that Dr. James Naismith invented the game of basketball – as well as the 13 Original Rules of Basketball.  You can read the original rules down below. These were obviously his greatest and most recognized professional accomplishments. The University of Kansas men’s basketball program officially started when Naismith arrived at the school in 1898, which was six years after Naismith drafted the sport’s first official 13 rules.

Without him, this great game we all love might have never been invented. So we should all be very thankful and fortunate that he had the creativity to invent and develop the game of basketball.

Having said that, James Naismith also had many other major accomplishments and highlights in his life. This Dr. James Naismith Biography will help give you some insight into this man’s amazing life. It will give you a closer look at the life of the man who invented basketball.

Dr. James Naismith, the inventor of basketball, developed the Original 13 Rules of Basketball. I think it’s very interesting to compare these rules with the rules used in today’s game. As you can tell, the rules developed by Dr. Naismith were the foundation of the rules being used today.

Obviously, today’s rules are much more detailed and descriptive in order to cover the always evolving game of basketball. But, I think it’s plain to see the tremendous similarities.

It’s important to remember that when James Naismith developed the game of basketball and its original 13 rules, the game was much simpler. After all, they used peach baskets for the hoops! Because of the simplicity of the game, the rules were made simple to accommodate this.

If you would like more information on Dr. James Naismith, the Original 13 Basketball Rules, or the invention of basketball, I would encourage you to check out the James Naismith Memorial Basketball Hall of Fame website.

This site is packed with some excellent information to help you learn a little bit more about this great game. I think that players, parents and coaches can all benefit from learning about the history of basketball! 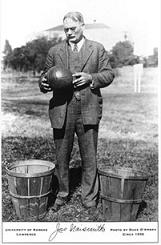 The object of the game is to put the ball into your opponent’s goal. This may be done by throwing the ball from any part of the grounds, with one or two hands, under the following conditions and rules.

1. The ball may be thrown in any direction with one or both hands.

2. The ball may be batted in any direction with one or both hands (never with the fist).

3. A player cannot run with the ball. The player must throw it from the spot on which he catches it, allowance to be made for a man who catches the ball when running at a good speed if he tries to stop.

4. The ball must be held in or between the hands; the arms or body must not be used for holding it.

5. No shouldering, holding, pushing, tripping, or striking in any way the person of an opponent shall be allowed; the first infringement of this rule by any player shall count as a foul, the second shall disqualify him until the next goal is made, or, if there was evident intent to injure the person, for the whole of the game, no substitute allowed.

6. A foul is striking at the ball with the fist, violation of Rules 3,4, and such as described in Rule 5.

8. A goal shall be made when the ball is thrown or batted from the grounds into the basket and stays there, providing those defending the goal do not touch or disturb the goal. If the ball rests on the edges, and the opponent moves the basket, it shall count as a goal.

10. The umpire shall be judge of the men and shall note the fouls and notify the referee when three consecutive fouls have been made. He shall have power to disqualify men according to Rule 5.

11. The referee shall be judge of the ball and shall decide when the ball is in play, in bounds, to which side it belongs, and shall keep the time. He shall decide when a goal has been made, and keep account of the goals with any other duties that are usually performed by a referee.

12. The time shall be two 15-minute halves, with five minutes’ rest between.

13. The side making the most goals in that time shall be declared the winner. In case of a draw, the game may, by agreement of the captains, be continued until another goal is made.

I hope you have enjoyed learning about The Original 13 Rules Of Basketball by Dr. James Naismith. If you need more information on the rules of the game please visit our page on youth basketball rules.