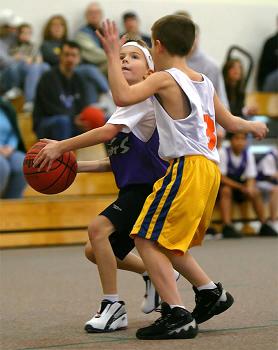 They play on an 8 ft. goal and must play man to man defense and wear colored wristbands to match up defense oppositions equally (skill and/or size). Each player must play a minimum of 2 quarters and sit for at least 1 quarter. The score is cleared after each quarter.

I’m interested in discussing and learning how to better develop the children’s fundamental skills, terminology, teamwork concept and incorporate a few effective offensive plays (screening and picks are not allowed).

I created a few simple plays that we attempted to execute depending on the opposing team’s level of play and found that we were eventually successful executing some plays towards the end of the season as the players developed.

One way I found to be effective in having the team remember plays was to name them after a favorite cartoon that was applicable to the play. For example, “Sponge Bob” meant that 2 players would drop down to the post where they would feel comfortable shooting from and that the ball handler would lob a pass over to them (this worked since Sponge Bob lives under the sea; the players remembered to drop below their defender).

I’m interested in sharing ideas or receiving coaching tips that have worked for others with this level of basketball play.